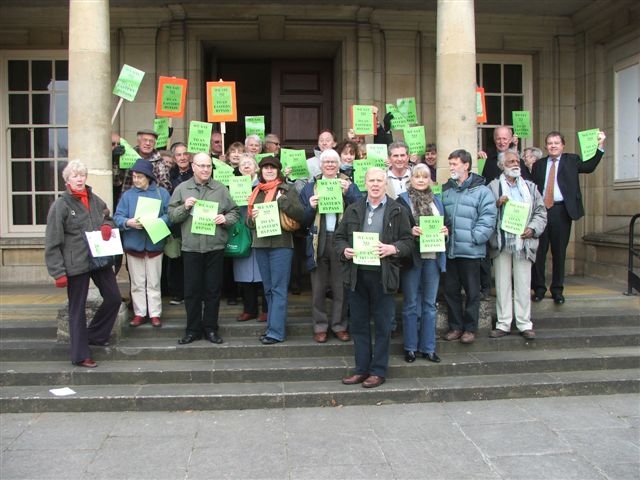 'We say NO to the Westbury Eastern Bypass':objectors to the proposed road outside Wiltshire County Council, 3 March 2008

Campaigners against Wiltshire County Council's controversial Westbury bypass have welcomed the way the planning inspector handled a meeting to discuss the forthcoming public inquiry into the £35 million scheme.

A spokesman for the White Horse Alliance praised the even-handed way the meeting was conducted. 'We would like to thank the inspector for making it clear that cancellation of an April starting date for the inquiry was not our fault and for putting the blame squarely on the planning inspectorate.'

At the 'Pre-Inquiry Meeting' in the council chamber at County Hall on Monday 3 March, the Inspector, Mr Alan Langton, said 'I am less than happy with the way the arrangements were made for this inquiry.'

Mr Langton singled out a failure to consult over the timing of the inquiry. It was the Planning Inspectorate's imposition of a starting date of April 29 without consultation that forced the WHA to take the first step in a legal challenge that would have ended in the High Court if government lawyers had not backed down and asked all parties to discuss a new date.

At the meeting on Monday 3 March all parties agreed that they would be ready to start on 17 June. The Inspector, sitting with Mr John Yellowley, made it clear that he would recommend this date to the Secretary of State for Communities, Hazel Blears, who will make the decision. The inquiry is expected to take six weeks.

The inspectors are still looking for a suitable venue for the inquiry. Mr Langton said he wanted this to be in Westbury if a suitable place could be found. Inspectors are concerned over disabled access and a shortage of rooms at The Laverton.

The inspectors visited the area on Tuesday 4 March to see traffic conditions on the A350 before a three-month closure of the A36 south of Bath causes trucks to divert onto the A350. The county council has made an agreement with BANES council that Bath's HGVs could be permanently diverted down the A350 if the County gets permission to build a Westbury bypass. Objectors are concerned that this would increase congestion in other communities north of Westbury and on the HGV 'rat-run' from Yarnbrook to the A36 at Rode.

A decision is unlikely to be made until next year. Wiltshire County Council has yet to secure government funding for the project. Its bid to the Department for Transport is expected this month.

The eastern bypass plan is also opposed by the Wiltshire Wildlife Trust, which was represented at the meeting on Monday. Along with other objectors the Trust can be expected to welcome Mr Langton's admission on Monday that he was out with his local natural history society at the weekend, putting up nest boxes for dormice.