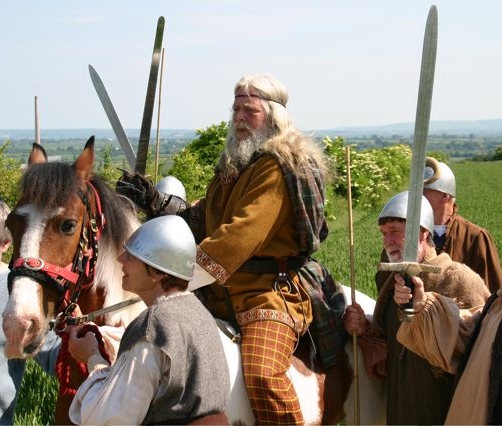 On Sunday 8 June, King Alfred and a platoon of Saxon warriors lined up in defence of the landscape of the White Horse and the Wellhead Valley which Alfred's army captured from the Danes in the summer of AD 878.

This location marks the point where the proposed A350 eastern bypass would pass under Newtown Road. The road would be three lanes wide here and the bridleway along the ancient drove road to Wellhead Springs would be diverted to run alongside it.

In the background, behind the King and his footsoldiers, was the Westbury White Horse and the Bratton Camp iron age hill fort where Alfred is believed to have routed the Danes more than a thousand years ago. This decisive battle led the Danes to withdraw from Wessex and marked the beginning of their slow withdrawal from England as a whole. That is why the inscription on the sarsen stone memorial to the battle - erected on Bratton Down near to the hill fort - is in English.

The re-appearance of Alfred was organised by the Westbury Bypass Alliance, one of the member groups of the White Horse Alliance, to draw attention to the importance of this historic landscape and the way it would be damaged by having a 60-mph highway running through it.

The Battle of Ethandun (today's Edington) followed months of skirmishes provoked by King Guthrum's unexpected attempt to occupy Wessex by marching a large army from Gloucester to Chippenham in January 878. Alfred retreated westwards and by Easter it looked as if the Danish forces might soon control the whole of Wessex. But Alfred fought back and by May was able to lead an army comprising men from Somerset, Wiltshire and Hampshire against the main Danish force at Edington. The Danes were routed and their broken army retreated to its camp at Chippenham. One of the terms of the truce that followed was that Gutrum should be baptised, receiving the English name Athelstan. The other was that the Danes should withdraw from Wessex.

Bratton Camp is an iron age hill fort, possibly 2000 years old. It is 23 acres in area, with a long barrow inside that may date from 3000 BC. Although the location of the battle is not known for certain, it seems likely that the Danes were encamped in this ready-made fort when Alfred attacked. Some accounts have Alfred marching from another ancient hill fort, Cley Hill, which can be seen clearly from the escarpment of Salisbury Plain, 6 miles to the south west. It is not known whether Alfred marched across country, for example to Wellhead Springs, or whether he would have gained the high ground of Salisbury Plain further south.

The White Horse. This is the oldest and largest in Wiltshire. Known as the Westbury Horse, but actually in the parish of Bratton. Created - or re-cut - in 1778, it replaced an earlier horse, date unknown, but possibly around 1700. It is a popular belief that the White Horse was created as a memorial to Alfred’s victory over the Danes at the Battle of Ethandun.

The present outline of the horse was made when it was "Restored" in 1873 with an edging of upright stones. The chalk was concreted over in the 1950s and re-concreted and painted with biocide in 2007.

Although there is little evidence that the original figure was cut before the early 18th century the outline of an earlier iron-age figure is said to have been seen from the air. Recent reseach into the iron-age white horse at Uffington in Oxfordshire has made a link between it and the nearby iron-age hill fort. It seems these forts were well-established settlements and the emblem of the white horse nearby was a significant part of their identity.