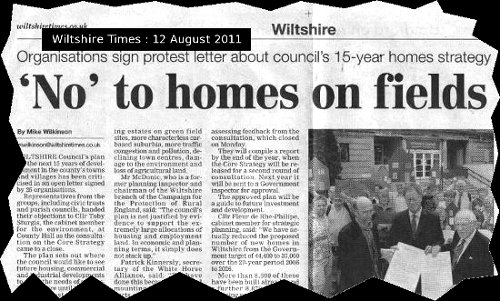 Twenty four community organisations from across Wiltshire, including civic trusts and parish councils, have signed an open letter to Wiltshire Council objecting to its plans for the future of the county to 2026. They say the council’s draft ‘Core Strategy’ is ‘unfit for purpose’ and want the council to think again.

The letter [PDF] is highly critical of the scale and location of development proposed in the draft document. Building 37,000 new homes across Wiltshire, with 20,000 houses concentrated in North and West Wiltshire over the next 15 years, would it says, lead to massive housing estates on green field sites, more characterless car-based suburbia, more traffic congestion and pollution, declining town centres, damage to the environment and loss of agricultural land.

Organisations opposed to the draft Core Strategy will deliver the Open Letter to County Hall in Trowbridge on Monday [8 August], an hour before the end of public consultation on the plan. They will be led by George McDonic, a past President of the Royal Town Planning Institute, former planning inspector and Chairman of Wiltshire CPRE.

Mr McDonic said ‘The council’s plan is not justified by evidence to support the extremely large allocations of housing and employment land. In economic and planning terms it simply does not stack up.’

Patrick Kinnersly, Secretary of the White Horse Alliance, which coordinated the open letter, said, ‘We have done this because we sensed mounting resistance in all parts of the county to a plan that would dump a sprawl of urban extensions and industrial estates into the open countryside of Wiltshire, especially along what the council sees as the A350 economic growth corridor through North and West Wiltshire from the M4 to the A36.’

Jenny Raggett, local coordinator for Campaign for Better Transport, said ‘The massive proposed growth of Western Wiltshire will mean more traffic everywhere, and not just on main roads. Junctions everywhere will accrue tailbacks, just as in the South East. The Wiltshire Community Plan says we need a real shift to bus and train on commuter corridors. But how it is this going to be achieved without substantial investment of public funds, which are currently scarce? The whole thing does not quite stack up.’

The White Horse Alliance has written to Wiltshire Country Council opposing its draft Core Strategy saying 'it does not represent a coherent plan for the future of West and North Wiltshire to 2026 and beyond'.