Land on bypass route for sale at £1m 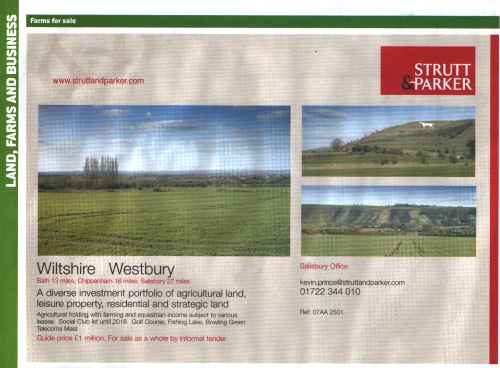 Fairview Farm, on the route of the proposed Westbury Bypass, has been put up for sale; the asking price is £1m.

Fairview Farm is owned by the cement manufacturer Lafarge, who's Westbury factory is beside the proposed road. The farm was formerly owned by the family of Dorian Jones, a leading proponent of an alternative route for the bypass, to the east of Westbury. Dorian's mother retains a shorthold tenancy on the farmhouse.

The property, described by agents Strutt & Parker as a 'diverse property portfolio' includes tenancies covering a social club, golf course, bowling green and fishing lake. Lafarge and its agents clearly expect buyers to be interested in the 'strategic' value of the land as an investment with potential for housing and commercial development. The former owners of the land, Blue Circle – now part of Lafarge, made no secret of their ambition to develop it for housing.

The sales information from the estate agents mentions that the route of the proposed bypass crosses the land, severing it, so as to 'trap' some of it between the new road and the town. It is clear that Lafarge is bent on a 'fire sale' to realise some cash for all its saleable assets at Westbury. Putting everything into a single bargain bundle for £1m leaves the buyer to sort out the tangled mess of tenancies and inherit the compulsory purchase order for land on the bypass route.

Land speculators should know that the farmland is not zoned for housing and it would have no access from the bypass. At the same time the peace and tranquillity of the site (in full view of the famous Westbury White Horse on the edge of Salisbury Plain) would be blighted by the noise and ugliness of a three-lane 60 mph road.

'This is a story of what happens when new roads are promoted as a way to open up farmland for more profitable commercial development, instead of finding the best ways to meet our needs for transport, food, housing and jobs,' said Patrick Kinnersly of the White Horse Alliance.

He continued 'The country is waking up to the fact that we cannot grow enough of our own food; we don't have enough affordable houses; the railway is in a mess; local hospitals are closing. Yet, the council is pressing on with a massive road that has already blighted this land, that would increase traffic and carbon emissions rather than reducing them, has cost Wiltshire taxpayers £4m so far and will cost them another £4m if the council gets permission to build it'

'The government will make its decision some time this summer. We are urging it to reject the bypass plan and invest in sustainable development rather than more of the same old car-dependent sprawl of executive housing estates and tin shed retail parks.'

See text for particulars of the property(PDF), taken from the Strutt and Parker website www.struttandparker.com